There is so much to do and see in Cambridge. Colleges and Universities are in abundance. But one that really sticks out for us as a ‘must see’ has to be Queens’ College.

Queens’ is a bustling community of students, fellows and staff. The College is located in the heart of the city of Cambridge right on the riverside. It is known for its ancient buildings and Patron Saints; St Margaret and St Bernard of Clairvaux.

Many tourists visit Queens’ College just to see the famous Mathematical Bridge. The bridge was designed in 1748 by William Etheridge (1709–76), and was built in 1749 by James Essex the Younger (1722–84). It has subsequently been repaired in 1866 and rebuilt to the same design in 1905. The red-brick building on the right-hand side of the bridge is the President’s Lodge (ca. 1460), the oldest building on the river at Cambridge. 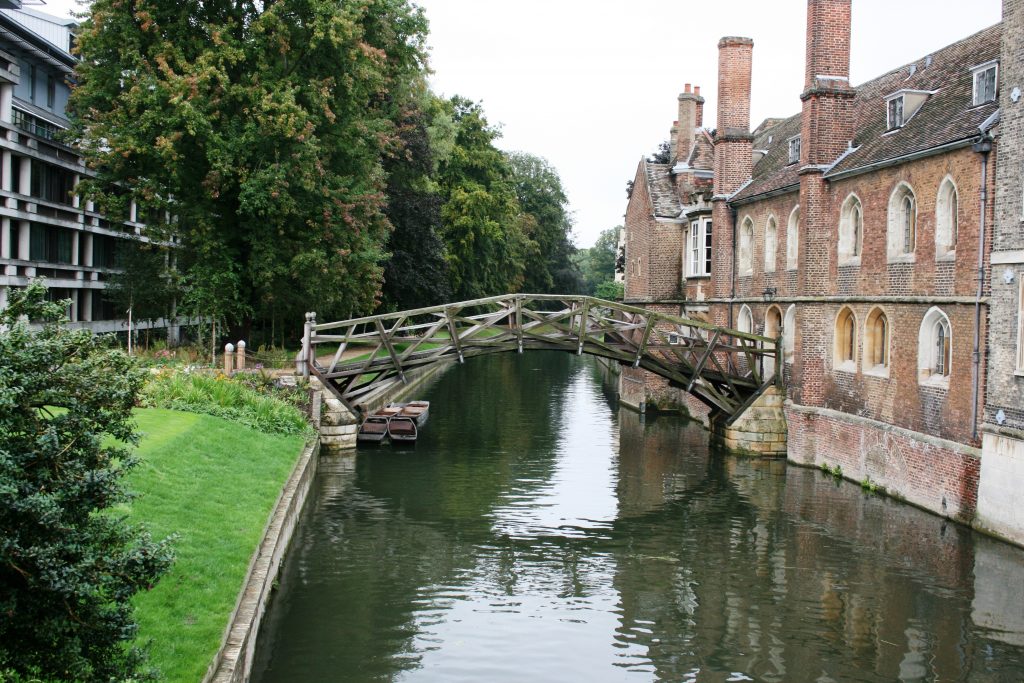 Another area of the college to see is the Old Court. It was the original Queens’ College, built in 1448. Old Court is rectangular, with a square tower in each corner, and a large gatehouse facing Queens’ Lane. Old Court is still used for student accommodation now and rooms are among the most sought after on the College central site. They are usually taken by third year undergraduates and Fellows.

And don’t forget the Old Library, founded in 1448. It is still situated in its original room with bookcases made from medieval lecterns. Although none of the original collection remains, the library holds a hugely significant collection of c. 20,000 early printed books and manuscripts dating from the 12th to 19th centuries. The collection covers the whole range of subjects studied by Queens’ members during that period, including theology, classics, history, philosophy, astronomy, medicine and English literature.

Queens’ being one of the oldest and largest colleges of the university, really is a piece of history. I highly recommend you see this beautiful college if you are visiting Cambridge. Notable college alumni include comedian Stephen Fry, and astronaut, Michael Foale.

The College is open to visitors all year round, except during the pre-examination study period (24th April – 12th May), the examination period (25th May – 16th June), certain ceremonial days (20th, 25th and 29th June, 6th and 7th July.), Christmas Day and Boxing Day (25th and 26th December).

Oh and see if you can spot the hidden spyhole in the Old Hall, where previous Masters could keep eye on the undergraduate festivities!