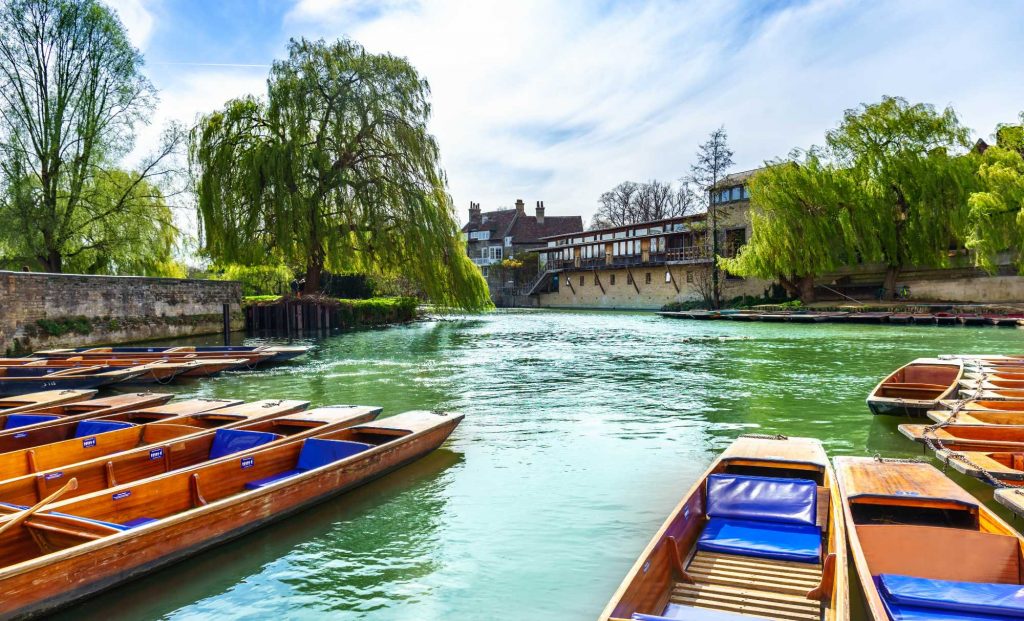 The chauffeured punt tour’s normally last between 45-minutes – 1 hour. The problem is, which company to punt with? There are numerous fully licensed punt operators in Cambridge, so here are just a few for you to pick from…

Seemingly the most well-known punting company in Cambridge, Scudamore’s was started in the early 20th Century and are Cambridge’s original punting company. They are open 364 days a year and offer family/group discounts. You can enjoy a chauffeured punt tour or try punting yourself by renting a punt boat per hour. Scudamore’s have punting stations at Mill Lane, Quayside and the Boatyard.

Rutherford’s have over 29 years of combined punting experience. Their boats come fully equipped with woollen blankets, umbrellas and battery operated waterproof blankets for the colder months. Rutherford’s pride themselves on their passion and knowledge of the colleges and history behind the city of Cambridge. Based at Quayside, Cambridge.

Magdalene began in 2008 and seem to be Cambridge’s alternative choice. They offer only chauffeured river tours starting from Jesus Green along the acclaimed college backs, providing one of the longest tours on the river cam. They are based at La Mimosa Landing Stage, Thompsons Lane.

Cambridge Punting Company was established in 2007. The company consists of four local owners that are dedicated to Cambridge’s history and offer you a factual trip down the River Cam. We like Cambridge Punting as they offer tours to suit all needs, whether that is to hire numerous private tours for parties and gatherings or any special occasion to celebrate. Based at Quayside, Cambridge.

Last but most definitely not least, we have ‘Let’s Go Punting’ who focus on private and shared chauffeured punting tours. Their tours last around 50 minutes and take the same route down the College Backs. Let’s Go Punting has a friendly website that enables you to book online (can be done on mobile and tablet devices). Based at La Mimosa Landing stage, Cambridge.

Whichever company you choose to punt with, we are sure you will have a wonderful trip down the River Cam. Our advice – take a camera, some of the sights are so beautiful they must be captured!

We use cookies to improve your browsing experience and to provide advertising which we believe may be of interest to you. By continuing to use the site, you agree to the use of cookies. To find out how to manage and disable cookies please read our cookie policy.

Clayton Hotel Cambridge is temporarily closed.
if you are a key worker please contact our hotel team to discuss your requirements by calling
+44 1223 792 888 or email
info.cambridge@claytonhotels.com

Book online now for stays after 1st May 2020